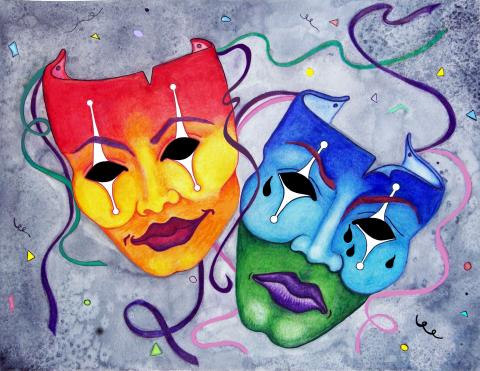 We’re back!  And it is “Bloody Murder” at the Lodge in Townsend on Friday, July 02 and 03rd at 7p.m. each night.  Director Gabby Bakkum has concocted a thriller of a play with six local actors who will scare you, tickle you and transport you past any local drama you may be involved in!

The fledgling community theater group began in 2019 and was headed off to a good start when COVID hit to put us “out ‘a business.”  The group, headed by LaRinda Spencer, has been thrilled to have Bakkum, a college student at Oregon State University who is home for the summer, head up a substantial list of plays including” Brothers Grimm Spectaulathon”; Our Town”;”I am whispering at the Top of my Voice” to name a few.  Bakkum is hoping to present one play outside in the park if weather permits.

“Bloody Murder”, a two- act play written by Ed Sala, will intrigue the audience with a story line about a group of the usual British murder-mystery types invited to a sumptuous country estate when suddenly one of them is poisoned.  The lady of the house refuses to call the police because “she won’t go through this again.” The play moves on to why they were invited in the first place and who done it?   It is guaranteed to entertain the most hardened of audiences.

Bakkum is 2018 graduate of Broadwater High School who studied acting at the American Academy of Dramatic Arts in New York for one year, then has gone on to Oregon State University in theater.  She is a sophomore there.  Bakkum attended a Grand Street theater camp in Helena and participated in Missoula Children’s Theater in elementary school.   Her desire is to be a part of the movie making industry either as an actor or a director.    She is the daughter of Kory and Denise Bakkum

Concessions will be available at intermission.

Tickets are $10.00 per person and may be purchased at the MSU County Extension Service office on Broadwater or by calling LaRinda Spencer, 475-4016.  They will be available at the door also.

Broadwater Community Theater group had worked with The Lodge owner, Tina Homann, to equip the former Masonic Hall with a stage and professional lighting.  Homann purchased the property from Townsend Masonic Valley Lodge 21 in 2016 and completed the remodeling in 2019. The roomy auditorium adds an historic flavor to the space with original lighting, hardwood flooring and wood wainscotting.  The building is now ADA approved with an elevator and commercial kitchen.

Broadwater Community Theater is underwritten by the Fun For Life Program.  That program’s initial purpose is to give scholarships to children in K-8 scholarships in music, art, theater and foreign language.  The nonprofit organization was formed in 1996 in the memory of Ryland KM Foote.  The nonprofit has given over 100 scholarships amounting to over $45,000.

Other Sites to Visit